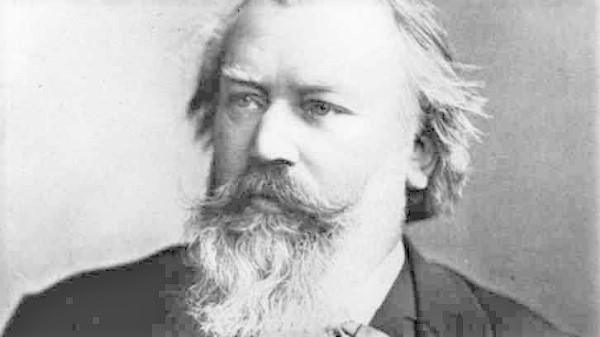 In the early 1860s, Brahms’ moved from Hamburg, his birthplace, to Vienna.  In this culturally vital, imperial capital of the Austro-Hungarian Empire, his creative range broadened, from its previous focus on large works in the Prussian and Lutheran tradition, to a wider variety of genres, incorporating non-German texts and musical styles.

In 1863 he was appointed director of the Vienna Singakademie, and the following year he became director of the Vienna Gesellschaftskonzerte.  During his tenure in both positions, he composed numerous works for chorus, both accompanied and a capella.  Many of these works were written for vocal quartet, among them the Liebeslieder Waltzes, Op. 52 and the Neue Liebeslieder, Op. 65.

These two collections of Liebeslieder (Love Song) waltzes – Op. 52 (published in 1869) and the Neue Liebeslieder, Op. 65 (1874) – were immediate hits, and became lucrative sources of income for Brahms.  The Op. 52 was first performed January 5, 1870, in Vienna. After Brahms received a copy of the first edition he wrote to the publisher, Simrock, in Berlin, “I must confess that it was the first time I smiled at the sight of a printed work of mine!”  The original publication is for two pianos and voice ad libitum, indicating the voices are optional.  This direction, made possible by the fact that the vocal lines are present in the piano part, was evidently inserted by the publisher, hoping to increase sales.  Brahms realized that this removed some of the most charming aspects of the piece, and the direction was omitted from the second set of Liebeslieder, Op. 65.

The Liebeslieder represent the mingling of the folk music of northern Germany (Brahms’ former homeland) and the waltzes and ländler of Upper Austria (his new homeland).

There are 18 songs in the initial volume and an additional 15 in the second – paying homage both to the fantastically popular Vienna “Waltz King” Johann Strauss, Jr., and to Franz Schubert, who had died in 1828, leaving many of his works unpublished.  During his first years in Vienna, Brahms was engaged in an ongoing project to edit a number of these works for publication. Among them were several collections of ländler, an Austrian folk dance in triple meter – a precursor of the more graceful and romantic waltz.  Alluding to Schubert’s work, Brahms marked the Op. 52 with the direction “Im Ländler-Tempo”.

For the texts, he turned to his favorite poet, Georg Friedrich Daumer (1800-1885).  All of the Liebesleider, with the exception of the last song of the Neue Liebeslieder, are sourced from Daumer’s extensive collection of verses, Polydora: A Song Book of World Poetry.  Like several other collections of romantic verse in folk styles, Polydora  is purported to consist of translations of actual folk lyrics – from Eastern European countries such as Hungary, Poland, the Czech Republic and Slovakia – which constitute the texts for the 18 songs of the Liebeslieder-Wälzer, Op. 52, and as far afield as Turkey and Malaysia – Nos. 1 and 10, respectively, in the Neue Liebeslieder.

In his time, Daumer was regarded as a major poet, philosopher and religious reformer.  His youthful Neo-Pietism led him to believe in and promote a religious vision of union with the Divine through nature, sensuality, and the adoration of an archetypal idealized feminine.  Brahms’ relationship with his archetypal idealized feminine, in the person of Clara Wieck Schumann and later her daughter, Julie, was intense and lifelong.  He set around twenty of Daumer’s poems in a variety of works, including the Liebeslieder.

Brahms’ Liebeslieder settings tend toward folk music in their melodic characteristics, with none of the text painting that a lesser composer might have employed.  A few songs, however, stand out from the rest.  Those that are concerned with different expressions receive appropriate treatment, for instance, in the Op. 52, No. 12, “Get up locksmith, and make me locks”, finds the narrator in anger, asking a locksmith to make locks for him claiming “Then the wicked, wicked mouths /Shall I shut forever!”  The intensity of the Brahms’ music conveys the urgency of the request in this, the shortest of the 18 songs.  In the ninth song, a man notices a girl peering out of a house on the bank of the Danube. Ten iron bars protect the doors of the house, but the man claims he can easily tear them down.   The calm atmosphere is shattered as the man explains his intention to break through the bars.  The 16th poem, “Love is a pit of despair”, receives the most fiery setting of all.

Despite their popular genre, their brevity, their characteristic “oom-pah-pah” rhythm and their typical patter of four-line verses in which each couplet is sung and then repeated, the songs are highly sophisticated.  Each one is an individual miniature, with its own comment on the nature of love.  Some are jovial and light-hearted, others ironic, introspective or sad.  Often the sentiment is left to dangle, incomplete or unexplained.

Due to the success of the Op. 52 set, Brahms decided to tap into the same vein six years later with The Neue Liebeslieder (New Love Songs).  This set has a darker tone – the lyrics tell of boats drifting, wrecked on the ocean of love; of dark eyes taunting, bewitching and destroying.  The music, too, is less playful and more complex, in minor keys with striking chromatic harmonies and jarring rhythms.  There is also a greater number of solo songs in this collection.  Perhaps Brahms felt this would appeal to his customers, or that these particular texts called for the declamation of a single voice.

There are 14 waltzes altogether, plus an epilog entitled: “Finally, you Muses, enough!” The epilog, from the last verse of Goethe’s Alexis und Dora, stands apart from the previous exotic texts, forming a conclusion with an intriguing relationship to the whole.  Brahms divided the 14 songs into two groups of seven and ordered them in a logical manner.  Each set opens and closes with a song for vocal quartet, and key relationships within each group follow a pattern.  There are thematic, harmonic and rhythmic interrelationships among the various numbers as well.  For example, Nos. 1, 3 and 7 share a motivic idea, while Nos. 1, 4, 5 and 10 have rhythmic elements in common.  No. 1 is lively and muscular, while the ensuing “Dark Shadows of the Night” is subdued and nocturnal.  The lovely melodies for the soprano in Nos. 6 and 9 are touching, and the effervescence of No. 11 delightful. The tenor part in No. 10 is deftly written, and the ensemble in No. 14 is full of color and ecstatic outpourings.  In the end, the final song, the only one not written in ¾ time, serves as a coda; a kind of “Amen” or closing prayer to the entire work.  In choral writing it is reminiscent of Brahms’ sacred music, especially his ‘a capella’ motets.  Casting his gaze over the lover’s wounded heart , where “Jammer und Glück” (sorrow and joy) exchange places in an endless, restless struggle, the poet invokes the ageless power of the classical Muses – the solace of nature, civilized wisdom, and the apotheosis of art.

The 2017 program of the New Haven Oratorio Choir, written by Gretchen Pritchard