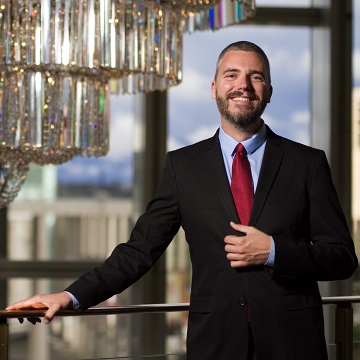 Based in Los Angeles, pianist Jeremy Frank has established himself as a vocal coach of the highest caliber. He serves as Associate Chorus Master and Assistant Conductor at LA Opera, where he has worked on over 60 productions. He is also a Adjunct Lecturer in Vocal Arts and Opera at the University of Southern California.

As a recitalist, Mr. Frank has partnered with Sondra Radvanovsky, Eric Owens, Brandon Jovanovich, Rodell Rosel, Dolora Zajick, Kate Lindsey and Susan Graham. Under the auspices of the LA Philharmonic, he accompanied Julie Andrews in rehearsals for Tchaikovsky’s Peter and the Wolf. At LA Opera, he served as Patti LuPone’s vocal coach in preparation for her GRAMMY award-winning performance of John Corigliano’s The Ghosts of Versailles. He accompanied Joyce DiDonato at the 54th GRAMMY Awards, the first time the ceremony featured a live performance by a classical singer. He has also frequently appeared as a guest on the podcast "Nobody Listens to Paula Poundstone", teaching the legendary comedienne to discover her voice. He is also the curator, host, and producer of LA Opera's web series and podcast, "Opera Happy Hour", where he demystifies the world of Opera for general audiences.

Dedicated to the development of young and emerging artists, Mr. Frank is a member of the faculty of the Domingo-Colburn-Stein Young Artist Program at LA Opera. He taught at the Juilliard School, where he was an Associate Coach. Mr. Frank also gave masterclasses and performed concerts with members of the Galina Vishnevskaya Opera Institute in Moscow and St. Petersburg as a guest of the American Embassy in Russia.

Mr. Frank is a graduate of the Houston Grand Opera Studio, where he was the Schissler Foundation Fellow. He also trained at San Francisco Opera’s Merola program and Western Opera Theater tour. He holds degrees in piano performance from St. Olaf College and the Cleveland Institute of Music, and earned a Specialist Degree in Piano Accompanying and Chamber Music from the University of Michigan, where he was a student of Martin Katz.