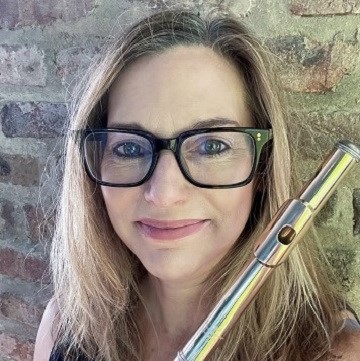 A veteran Hollywood studio recording artist, Heather has performed on over five hundred film and television soundtracks, often as principal flutist, for many of the greatest film composers of our time, including John Williams, Randy Newman, Michael Giacchino, Hans Zimmer and Danny Elfman. Her credits include Star Wars: Episodes VII, VIII, and IX, Toy Story 4, Jumanji, Spider-Man: Homecoming, Pirates of the Caribbean: Dead Men Tell No Tales, Star Wars: The Mandalorian, The Incredibles 2, Coco, X-Men, The BFG and The Grinch.

For 27 years, Heather has performed and recorded on a 10K silver keyed Powell flute (which she jokes is the longest relationship she has ever had). She also plays on a Braun piccolo, and Yamaha alto and bass flutes. Heather lives with her fiancé, her two children, two soon-to-be stepchildren and an awesome beagle named Rosie.